Prevalence of Leukocytozoon spp. in Rescued Wild Birds in Korea

Leukocytozoon spp. is a protozoan that causes infection in the blood, causing economic losses to the poultry industry. The aim of this study was to investigate the prevalence of leukocytozoonosis in wild birds rescued from January 2019 to December 2020. The medical records and the preserved residual blood samples of rescued and treated wild birds were analyzed. After DNA extraction from the preserved blood samples, real-time polymerase chain reaction (PCR) was used to test the extracted DNA. A total of 336 wild birds were tested in this study, of which 3.6% (6/336) were positive. Leukocytozoonosis was detected in four bird species, two of which were winter migratory birds and two were summer migratory birds in Korea. The results of this study suggest that wild birds visiting or staying in Korea may be infected with the Leukocytozoon spp., and there is a possibility that the pathogen may be transmitted to other domestic or wild bird species or shared with each other. It is necessary to conduct an extensive investigation focusing on important migratory bird habitats and to analyze the genetic relationships between domestic and wild bird-origin pathogens.

Leukocytozoon is a haemosporidian protozoan which belongs to the phylum of Apicomplexa (1). The transmission of the protozoa is mediated by simuliid black flies (Diptera: Simullidae) or Culicoides midges (Diptera: Ceratopogonidae). Unlike other hematoprotozoa (Plasmodium, Haemoproteus and Trypanosoma), Leukocytozoon spp. is relatively host-specific and has the characteristics of sharing infection within the same family (2). Worldwide, this infection has been reported to occur in a variety of domesticated and wild birds (chicken, waterfowl, turkeys, and free-living birds) and cause economic losses (3, 4, 5, 6, 7, 8). Due to the nature of wild birds to migrate between continents and countries, these birds, especially waterfowl, are known as major carriers of this disease. In Korea, sporadic cases have been reported (7, 8), however, there has been no investigation of the prevalence in bird population.

Leukocytozoon infection shows various symptoms depending on age and host condition. Symptoms are particularly pronounced in young individuals, with loss of appetite, weakness, listlessness, dyspnea and death within 24 hours (9). In the adults, the symptoms are relatively weak, and the mortality rate is not high. Once the infection is established by the vectors, the protozoa invades the vascular endothelial cells of various organs and form the first generation of schizonts. The second generation, megaloschizont, releases merozoites, and the released merozoites penetrate into blood cells to form gametocytes. At this stage, the protozoa is present in the blood, and can be diagnosed through a blood smear examination (10). However, due to the low sensitivity of blood smear examination and the necessity of skilled manpower, there is a trend of being replaced by PCR-based molecular genetic testing (11). It is a useful diagnostic technique, especially in patients with low parasitemia.

The aim of this study was to monitor the level of potential threat of disease introduction due to the migration of wild birds by examining the prevalence of Leukocytozoon spp. in rescued wild birds.

This retrospective study involved the analysis of medical records and residual blood samples of wild birds rescued from January 2019 to December 2020. The blood samples included in this study were obtained from wild birds during diagnosis or treatment processes, and blood smear examinations were performed. The blood samples were collected from wing vein, and the residual samples after the diagnostic testing were stored in an ethylenediaminetetraacetic acid tube at -20℃.

After thawing the stored blood samples, DNA extraction was performed using QIAamp® DNA Mini kit (Qiagen, Hilden, Germany), according to the manufacturer’s instructions. After the extraction, the DNA was stored at -20℃ until subsequent procedures.

A real-time PCR method was selected for the detection of Leukocytozoon spp. as described previously (Table 1)(11). Due to the wide genetic diversity of genus Leukocytozoon, it exhibits three separate real-time PCR reactions, namely, leuko-p1, leuko-p2, and leuko-p3. To ensure the efficacy of each test, limit of detection (LOD), coefficient of coefficients (R2), and efficiency of each real-time PCR reaction were assessed in quintuplicate on serially diluted recombinant vectors with known copy numbers per 1 μl. A linear regression test was performed using SigmaPlot 12.5 (Systat Software, San Jose, CA, USA) to determine the value of coefficient of determination (R2) and slope curve value. The PCR amplification was performed using the ABI7500 Fast Real-Time PCR system (Thermo Fisher Scientific, Waltham, MA, USA). The reagent composition and the reaction conditions were similar to those in a previous report (11).

After confirming the performance of the tests, each of the three real-time PCRs were tested using the extracted DNA from the rescued wild birds. The three real-time PCRs were performed on the same sample respectively, and if at least one of the three tests was positive, it was judged as positive. Also, only those with a cycle threshold (Ct) of 35 or less were determined to be positive. Samples suspected of being positive in real-time PCR were double-checked with nested PCR targeting other parts of the cytochrome-b gene (12), and the PCR amplicons were sequenced and confirmed by comparison with BLAST database. Table 2 summarize the results of comparison evaluation between the sequences identified in this study and GenBank database.

The information of the rescued wild birds included in this study

Peripheral blood samples collected from a total of 336 rescued wild birds were obtained and tested in this study. These birds consisted of 53 species, 23 families, and 16 of the 23 avian orders (Table 2).

The estimated LOD of each real-time PCR for each recombinant vector was: 65 for leuko-p1; 6.6 for leuko-p2; and 58 for leuko-p3, respectively. Standard curves generated by each real-time PCR using 10-fold serial dilutions of each target showed correlation coefficients (R2) ranging from 0.989 to 0.993 and slopes of 3.53-4.25 (Fig. 1), indicating good linearity of the PCR reaction. 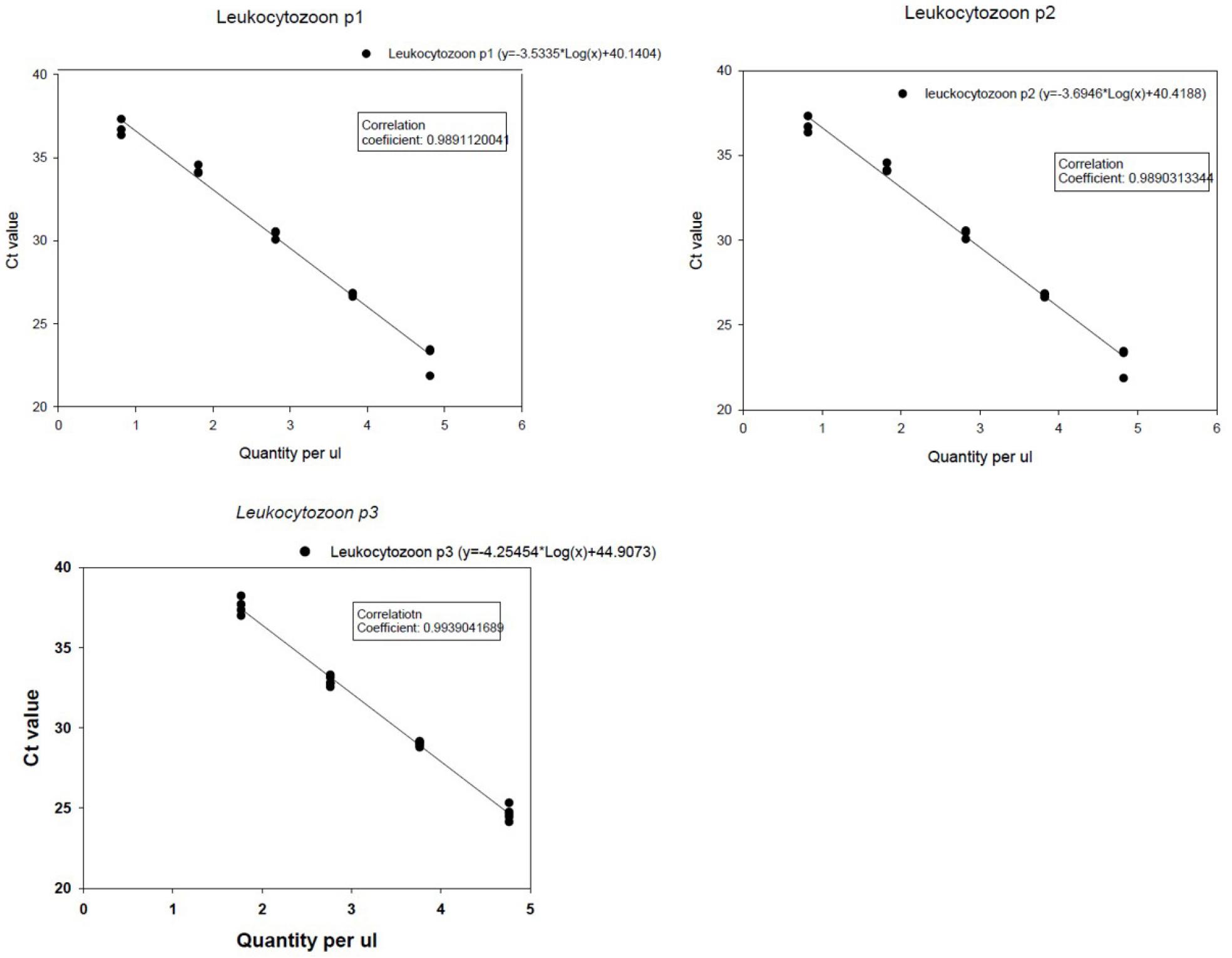 Standard curves generated by each real-time PCR (leuko-p1, leuko-p2 and leuko-p3) using 10-fold serial dilutions of each recombinant plasmid vector. The vector containing the target gene with known quantity (i.e., copy number per 1 ul) was prepared for each real-time PCR. The Y-axis indicates cycle threshold (Ct) values. Each regression line was constructed based on 5 replicate measurements.

Results of cytochrome-b gene sequence analysis of Leukocytozoon spp. detected in this study

This study was a retrospective evaluation of the presence of leukocytozoonosis in wild birds that were rescued and treated between 2019 to 2020. As a result of the investigation, 3.6% of the 336 wild birds were found to be positive for infection, confirming that leukocytozoonosis was present in wild birds living or staying in Korea. Considering that Leukocytozoon spp. is highly pathogenic in Anseriformes (ducks and other waterfowl) and Galliformes (chickens and turkeys) (13), it is thought that if the number of waterfowl surveyed is further increased, the prevalence rate is likely to be higher.

In this study, leukocytozoonosis was observed in 4 avian species: bean goose, brown hawk-owl, broad-billed roller, and common teal. Among these, the bean goose and common teal are winter visitors that fly between Siberia and Korea, and the brown hawk-owl and broad-billed roller are summer visitors that fly between Southeast Asia and Korea. In terms of the migration routes of migratory birds, Korea belongs to the East Asian-Australasian flyway, which suggests the possibility that various genotypes of Leukocytozoon spp. distributed from Siberia to Southeast Asia can be introduced into Korea and shred among birds. In order to confirm the need for disease prevention and control, it is necessary to investigate the diversity of genotypes of Leukocytozoon spp. in migratory birds introduced to their major habitats and to determine the relationship between the genotypes found in the domestic poultry industry and wild birds.

In conclusion, this study confirmed a degree of leukocytozoonosis in rescued wild birds through molecular diagnostic testing. Considering the bias in the collection of research samples due to the study sample being limited to only rescued wild birds, the prevalence of the Leukocytozoon spp. may have been somewhat underestimated. Focusing on major migratory bird habitats by region in Korea, additional research is needed to confirm the degree of infection and pathogen genotypes of the migratory bird species by season.