The aging population has grown rapidly into an aging society, which has led to an increase in diseases, exposure to harmful bacteria and the spread of multidrug- resistant bacteria. Furthermore, in the treatment of chronic hospitalized patients, misuses and abuses of antibiotics have resulted in antibiotic resistance genes of bacteria, which led to the emergence of super-bacteria resistant to most of the antibiotics (1, 2). Moreover, in modern society, where movements of people and commodities have increased due to various transportation technology advancements, super-bacteria are not a problem of a specific region or country, but rather a global issue. Also, recent studies have shown that, excessive or long-term use of antibiotics causes an imbalance in the intestinal microbial environment, in the case of young children, if they continue to take antibiotics at a time when the balance of the intestinal microbiome is changing, adversely affect their health at adults (3).

Probiotics refers to a group of microorganisms which contribute to health promotion by creating a beneficial microbial environment in the human gut, such as Lactobacillus, Bifidobacterium, etc. lactic acid producing bacterial organisms. However, in 1989, Fuller defined probiotics as a beneficial effect on the host by improving the intestinal microbiota, and it was established as a living microorganism (4). Probiotics produce various antimicrobial peptides such as bacteriocin, lactic acids, acetic acids, and other bacterial metabolites during living in intestinal microflora (5, 6). It also inhibits the activity of pathogens in the human body, has anti-inflammatory, antitumor, antibacterial, and antiviral effects, and down-regulates blood cholesterol level (7). Additionally, it is known that probiotics can enhance the ability of macrophages to recognize pathogens, and promote the secretion of immune substances in the intestinal environment, thereby exhibiting immunomodulatory effects (8). Probiotics can also enhance the antibacterial effect and reduce the resistance of antibiotics. It has been reported that the administration of probiotics to premature infants during antibiotic treatment reduced the resistance to antibiotics (9). Furthermore, according to Lesbros-Pantoflickova’s report, simultaneous administration of antibiotics and probiotics to Helicobacter pylori increased the inhibition of their growth, and reduced side effects of antibiotics (10).

However, many studies have only focused on the increase of antibacterial effects of antibiotics even viable lactic acid bacteria (LAB) against H. pylori in the stomach, through simultaneous administration of probiotics and antibiotics. Probiotics studies on increasing the efficacy of antibiotics against multidrug-resistant pathogenic bacteria are not sufficient, due to the fact that live LAB can be inactivated by the antibiotics (11). For this reason, most studies on the antibacterial efficacy of probiotics have been performed using viable LAB. However, LAB frequently has a low probability of reaching and adhering to the intestine through oral administration (12). Nevertheless, the inactivated cells of LAB remain in the digestive system providing beneficial effects to health, and they are characterized by containing antimicrobial active substances such as bacteriocin, large quantity of peptidoglycan, which is a glycoprotein within the cell wall of LAB, lipopolysaccharides (LPS), and organic acids. Also, probiotic stability can be ensured during storage, and the inactivated cells required can be sufficiently supplied in quantity less than that of viable cells (13).

With the goal of developing probiotics that possess these functions, the present report has been carried out in order to evaluate whether sonicated Bifidobacteria metabolites or viable cells are effective. The antibacterial activity of Bifidobacteria, as probiotics, was compared with eight strains of the viable and sonicated-inactivated cell, while verifying antimicrobial activity of Bifidobacterium spp. against multidrug-resistant pathogenic bacteria. Subsequently, a disc diffusion assay was conducted in an experiment to establish whether four strains of the viable and inactivated probiotic cell component could inhibit pathogenic bacteria growth.

All Bifidobacterium strains were obtained from Korean Collection for Type Cultures (KCTC). Bifidobacterium strains were cultured in Lactobacilli MRS (Man Rogosa Sharpe) broth (BD Difco) with 0.05% (w/v) of L-cysteine in an anaerobic incubator (CO2 5%, H2 5%, N2 90%) at 37°C for 48 hrs (Table 1). After incubation, Bifidobacteria were centrifuged at 4,000 rpm for 10 min. The bacterial-free supernatant was then filtered through a sterilized 0.22 μm pore size low binding cellulose acetate filters (Millipore, Billerica, MA, USA). Homogenate inactivated cells are obtained by mechanical crushing of cells, which also exhibits the same effect as probiotics without the cellular denaturation by heat-killing (16). The bacterial-free supernatant was separated by centrifugation, and the pellets were sonicated by ultrasonic waves to make a pulverized solution and employed in the experiment. To produce sonicated-inactivated Bifidobacteria, the pellets were washed twice with phosphate-buffered saline (PBS) and suspended in the same buffer. Bacterial suspensions were adjusted to a final concentration of 1.0×109 CFU/mL before sonication for 6 min (amplitude 100%, pulse on 60s, and pulse off 60s) with a sonicator (VCX-130, Sonics & materials, USA). Sonicated-Bifidobacteria were centrifuged at 8000 rpm for 10 min, and filtered using a 0.22 μm syringe cellulose filter.

The antimicrobial activity of the Bifidobacterium isolates against E. faecalis, P. aeruginosa, and S. aureus was determined by the agar dilution method based on the guidelines of the Committee for Clinical Laboratory Standards (CCLS) (17). All pathogenic strains were diluted to a concentration of 10 CFU/mL and cultured for 24 hrs. at 37°C in BHI broth, containing 25% (v/v) or Bifidobacteria supernatants. Percent of growth inhibition was detected by measuring the absorbance of the mixtures at 630 nm using a microplate reader. As a control, E. faecalis, P. aeruginosa, and S. aureus were cultured in BHI broth with the same quantity of sterile distilled water. The growth inhibitory effect of the Bifidobacteria supernatant and sonicated Bifidobacteria were calculated based on the turbidity measured by optical density.

The minimum inhibitory concentration was measured with four antibiotics. Antibiotics utilized in the experiment were gentamicin (GEN), ciprofloxacin (CIP), erythromycin (ERY), and tetracycline (TET) (TCI, Tokyo, Japan). The concentration of each antibiotics was established by the serial dilution method, and each antibiotics was added to Mueller-Hinton broth (Difco). The test strains were transplanted in Mueller-Hinton broth and cultured in an incubator at 37°C for 24 hrs. The number of cells were counted per 0.5 McFarland standard, then adjusted to a final bacterial concentration of 1×104 CFU/mL for use as bacterial solutions for the MIC test. 50 µl of each of the prepared bacterial solutions was inoculated on a medium containing each antibiotic and incubated at 37°C for 48 hrs. Turbidity of the test broth was measured in terms of optical density at various dilutions. When the optical density values for each dilution of the LAB test broth and the pure bacterial culture medium were nearly identical, the minimum concentration of theLAB test broth was performed as the MIC.

Antibacterial diffusion assay of the CCLS was performed to determine the level of antibacterial activities against the screened pathogens on supernatant. Four supernatants, selected based on growth inhibitory effect results, were added to BHI agar medium to a 10% (v/v) level. Pathogenic bacterial strains were separated on solid agar medium (concentration of 108~109 CFU/mL) with an antibiotic disc, and cultured in a 37°C incubator for 24 hrs. Four different types of antibiotic discs utilized in the experiment were gentamicin, ciprofloxacin, erythromycin, and tetracycline. As a control, pathogenic bacteria strains were suspended on BHI agar medium incubated in a 37°C incubator for 24 hrs. The diameter of each clear zone after incubation was measured by calipers in millimeters. 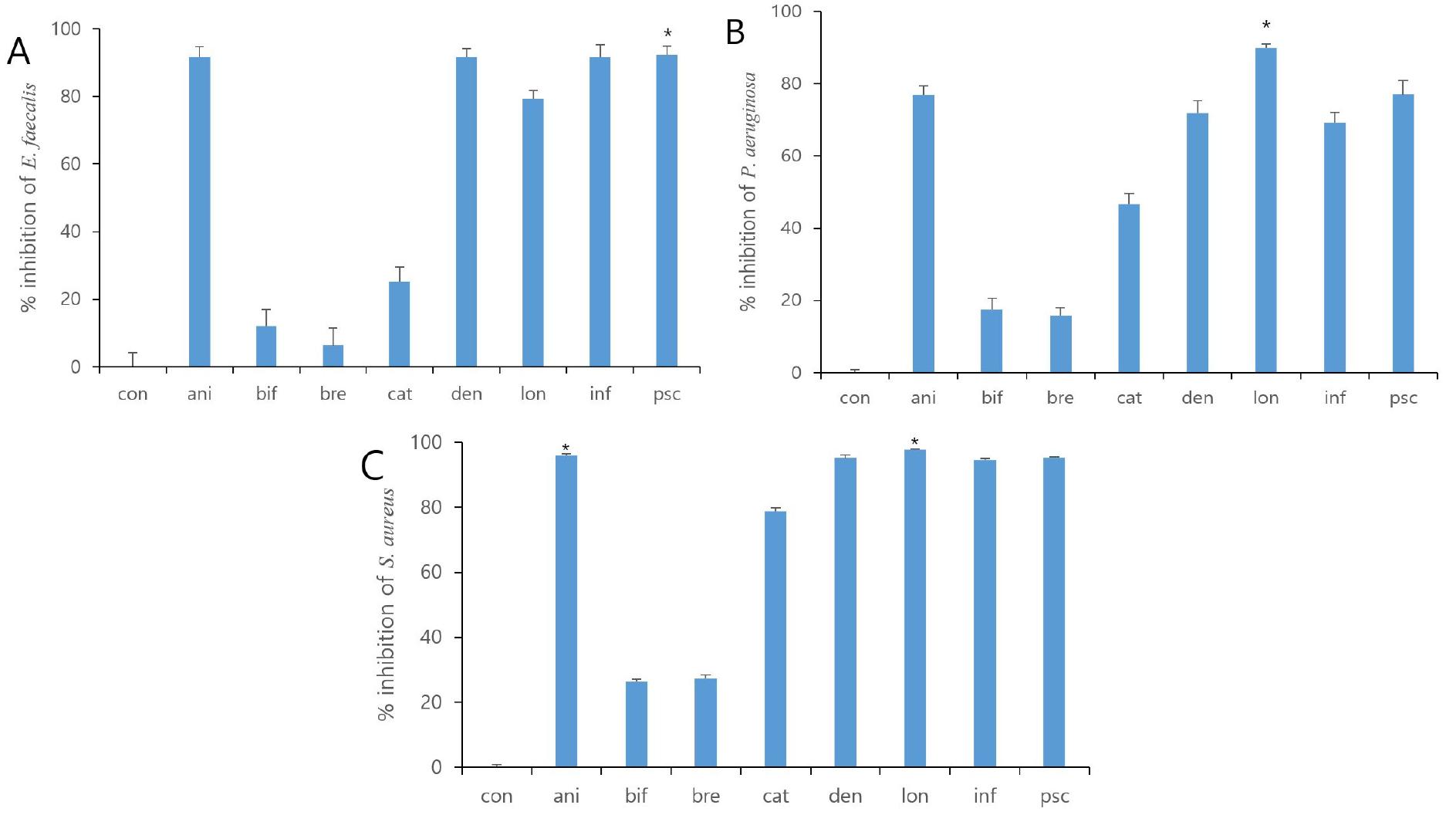 Fig. 1. Growth Inhibitory effect with cultured eight strains of Bifidobacteria supernatants. All bacteria were treated with 25% (v/v) Bifidobacteria supernatants for 24 h. % of inhibition was determined by Growth Inhibition assay. The value represents the mean ± S.D. * p < 0.05. Con, control; ani, B. lactis; bif, B. bifidum; bre, B. breve; cat, B. catenulatum; den, B. dentium; lon, B. longum; inf, B. infantis; psc, B. pseudocatenulatum.

As shown in Fig. 2, media containing Bifidobacterium supernatants have been shown to inhibit the growth activity of pathogenic bacteria compared to the control group. For the four antibiotics, such as GEN, CIP, ERY, and TET, pathogenic P. aeruginosa, E. faecalis and S. aureus showed high antibiotic resistant, expectably. All eight types of growth media with Bifidobacterium supernatant showed an inhibitory effect, and four strains out of eight (B. longum, B. pseudocatenulatum, B. dentium, and B. infantis) demonstrated remarkable effect in all three species of pathogenic bacteria. B. bifidum and B. breve had a lower inhibitory effect than other Bifidobacterium supernatants (Fig. 1). MIC values of the four types of antibiotics againstpathogenic P. aeruginosa, E. faecalis, S. aureus and Bifidobacterium spp.showed difference. However, statistical significance reliability was shown to be very low. (Table 3). To investigate specific differences, it will be need to identify by comparing the components of supernatant through subsequent experiments.

Antibacterial activity of Bifidobacterium spp. apply for through the growth inhibitory effect with cultured eight strains of Bifidobacteria supernatants. ctrl, control; ani, B. lactis; bif, B. bifidum; bre, B. breve; cat, B. catenulatum; den, B. dentium; lon, B. longum; inf, B. infantis; psc, B. pseudocatenulatum. 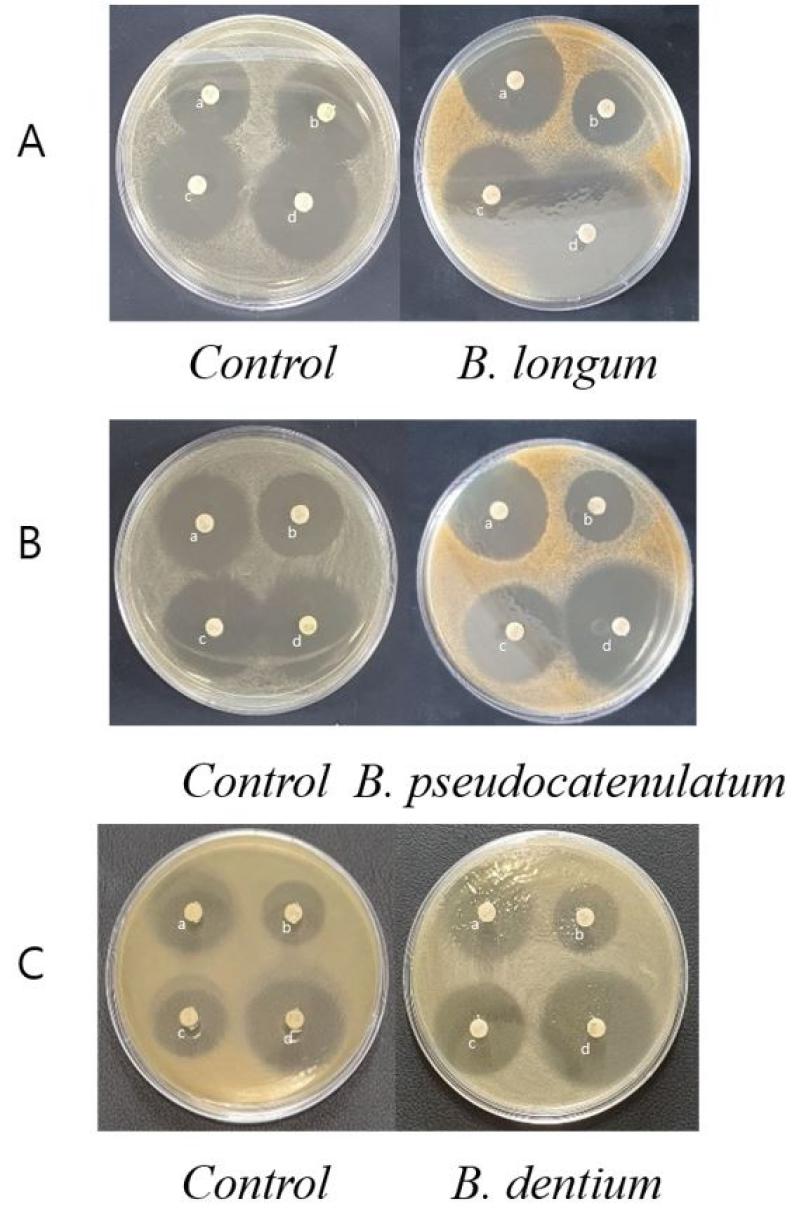 The use of various antibiotics for the treat of complex degenerative disease speed up recovery in hospitals, but community associated infections have increased significantly, with the spread of antibiotic-resistant bacteria at greater spread and diversity. Novel solutions are desperately required, as the effective antibiotics are limited (18). Several studies have shown that probiotics can inhibit the growth of methicillin-resistant S. aureus and P. aeruginosa(19, 20). AL-Saadi reported that B. breve had antagonistic activity against methicillin-resistant S. aureus (MRSA) (21). Also, Lee reported that Bifidobacterium strain could have a potential application for alternative therapy in P. aeruginosa and Acinetobacter baumannii (22). Therefore, the attempt of this investigation was to ascertain whether the combined administration of LAB may enhance the antibacterial effect of antibiotics.

There are various mechanisms conjectured that could be responsible for the probiotic effect, even though the definition of probiotics includes that the probiotic bacteria must be viable, and administered in enough quantity to produce a health effect in human. As one of them, not only with viable cells but some other with bacterial metabolites or inactivated components could be involve. The physiological adhesion activity of inactivated cells increases in the intestine epithelial cell, and are induced by direct contact with immune cells. If the demonstrated effect examined, the components of the inactivated cells of probiotic LAB differ from one strain to another. The microbial component exhibits immunomodulatory activity by selectively passing through a binding that recognizes toll like receptors through microfold (M) cells in the intestinal epithelial mucus membrane such as Peyer’s patches. Even before passing through to the M cell, it also contacts the intestinal immune cells through dendritic cells (23). The inactivated microbial component passing through M cells activates macrophages to express cytokines, and stimulates immune responses. Since antibiotics have been in use for a long history, pathogens are less susceptible to antibiotics and bacterial resistance to antibiotics proliferate more strongly and selectively, leading to a phenomenon of microbial shift (24). It is a different way from that of living cells producing organic acid, and secreting bacteriocin to show antibacterial activity. However, heat-killed cells also do not induce direct cytotoxicity, and have similar effects to live cells. They inhibit the proliferation of pathogenic bacteria by inducing phagocytosis or inflammatory cytokines of immune system (25, 26). Additionally, it forms a conjugate with pathogenic bacteria to help discharge it out of the digestive system.

Through a summary of the experimental results, we believe that when Bifidobacterium strains are administered with antibiotics, the antimicrobial effect may increase, allowing reductions of the treatment duration or dosage, and therefore reducing the potential for overuse of antibiotics. Consequently, it may result in suppressing the emergence of multidrug- resistant bacteria due to the use of antibiotics, which is perceived as a need to be combined with probiotics. We anticipate the possibility of clinical use of inactivated probiotics with specific strains as a combined administration of antibiotics or immune adjuvants through continuous following research on mechanisms of synergistic antibiotic effects.

The present study was supported by the Duksung Women’s University research grants of 2019.

Blaser MJ. Antibiotic use and its consequences for the normal microbiome. Science 2016;352:544-5.