Comparison of Primers for Oral Mycobiome Study in Intubated Patients

In intubated patients, oral fungus including Candida rapidly can increase. Fungal infections cause a significant proportion of health care associated infections. For efficient prevention and management, characterization of the oral mycobiome is required. In this study, we tested two primers to characterize the oral mycobiome in intubated patients under mechanical ventilation support. Buccal samples from intubated patients were collected using Levine technique. Two primers (ITS3 and ITS7) targeting internal transcribed spacer (ITS)2 region was tested. Next generation sequencing was applied for mycobiome analysis. Alpha diversity, beta diversity and relative abundance was determined to compare the primer performance. The richness and evenness were significantly higher using ITS7 primer. When phylogenetic distance was included, there was no difference in richness. In beta diversity analysis, most of the samples were closely clustered suggesting that similar mycobiome structure was assigned by the tested primers. When relative abundance of the assigned taxa was compared, Candida was the most abundant genus. At the species level, similar species was assigned by both primers. However, C. sake, C. intermedia, C. parapsiolisis and Yarrowia porcina was only assigned by ITS3 primer, while Alternaria betae-kenyesis was only assigned by ITS7 primer. In intubated patients, diverse oral mycobiome was detected. Although the tested primers predicted similar mycobiome structure, there were several species that was uniquely assigned by each primer. Selecting optimum primer to characterize the oral mycobiome should provide better understanding the mycobiome community in oral cavity.

Analysis of the mycobiome has provided deep understanding into their role in human health and disease (1). In healthy subjects, the biomass of the oral mycobiome is relatively low compared to the bacterial load (2). Intubation and critical illness can reduce oral immunity and exacerbate poor oral hygiene (3, 4). In intubated patients, fungal load including Candida rapidly increases after admission to an intensive care unit (ICU) (5). Fungal infections cause a significant proportion of health care associated infections (HAIs) and Candida species have been reported as the most prevalent pathogens causing HAIs (6, 7). Characterizing oral mycobiome is the first step to understand the shift of oral mycobiome and design proper management.

The inclusion criteria for ICU patients were; 1) > 18 years of age, 2) endotracheal tube use with holding methods, 3) consent for participation from the patient’s family. This study was approved by the Institutional Review Board (DAUHIRB-19-072). ICU participants in this study were mostly sedated or at severely poor levels of consciousness; therefore, family members were considered as the legal representatives with the power of attorney based on the International Council for Harmonization (18). During the participant recruitment period, the purpose, voluntary nature of participation, confidentiality of information, and procedures used in the study were explained to family members, and informed consent was obtained from each family.

Buccal swap samples were collected using the Levine technique; the swab was rotated over an approximately 1cm2 area with sufficient pressure (19). Sterile cotton swabs were used for the collection and were placed in a 15 mL conical tube labelled with the sample ID and stored at -80°C.

Extraction of Genomic DNA and Next Generation Sequencing

Basic microbiome analyses have been performed using the QIIME2 (version 2020.6) (20) and associated plugins. To measure alpha diversities, Faith PD index, Choa1 index, and Shannon’s index method were used. For the beta diversity analysis, the weighted UniFrac was used. The Mann–Whitney U test was used to assess the statistical significances between the groups for alpha diversities. To assign taxonomy to the unique representative sequences, pre-trained Naive Bayes classifier, using UNITE Database (21), was used. Phyloseq package was used to construct phylogenetic tree (22).

The 5 enrolled ICU patients (all male, age 68.4 ± 8.5) included a heterogeneous set of underlying diseases and acute indications for mechanical ventilation (Table 1). Four subjects were sampled at multiple time points. A total of 20 samples were tested with both ITS3 and ITS7 primers.

Diversity of the mycobiome

ITS2 region was targeted to compare the reliability of fungal diversity surveying the oral mycobiome composition. The alpha diversity was estimated by Chao1, Faith PD and Shannon test. When the phylogeny of the taxa was not considered, ITS7 showed higher richness (Chao1, p=0.022586) (Fig. 2A) and evenness (Shannon index, p=0.000018) (Fig. 2C). However, there was no significant difference in Faith PD, which uses phylogenetic distance to calculate the richness of the diversity (Fig. 2B). To compare the mycobiome structure, beta diversity was determined using weighted UniFrac, which considers the phylogeny of the taxa. The respective oral samples showed nearby distribution suggesting the mycobiome was similar between ITS3 primer and ITS7 primers (Fig. 2D). 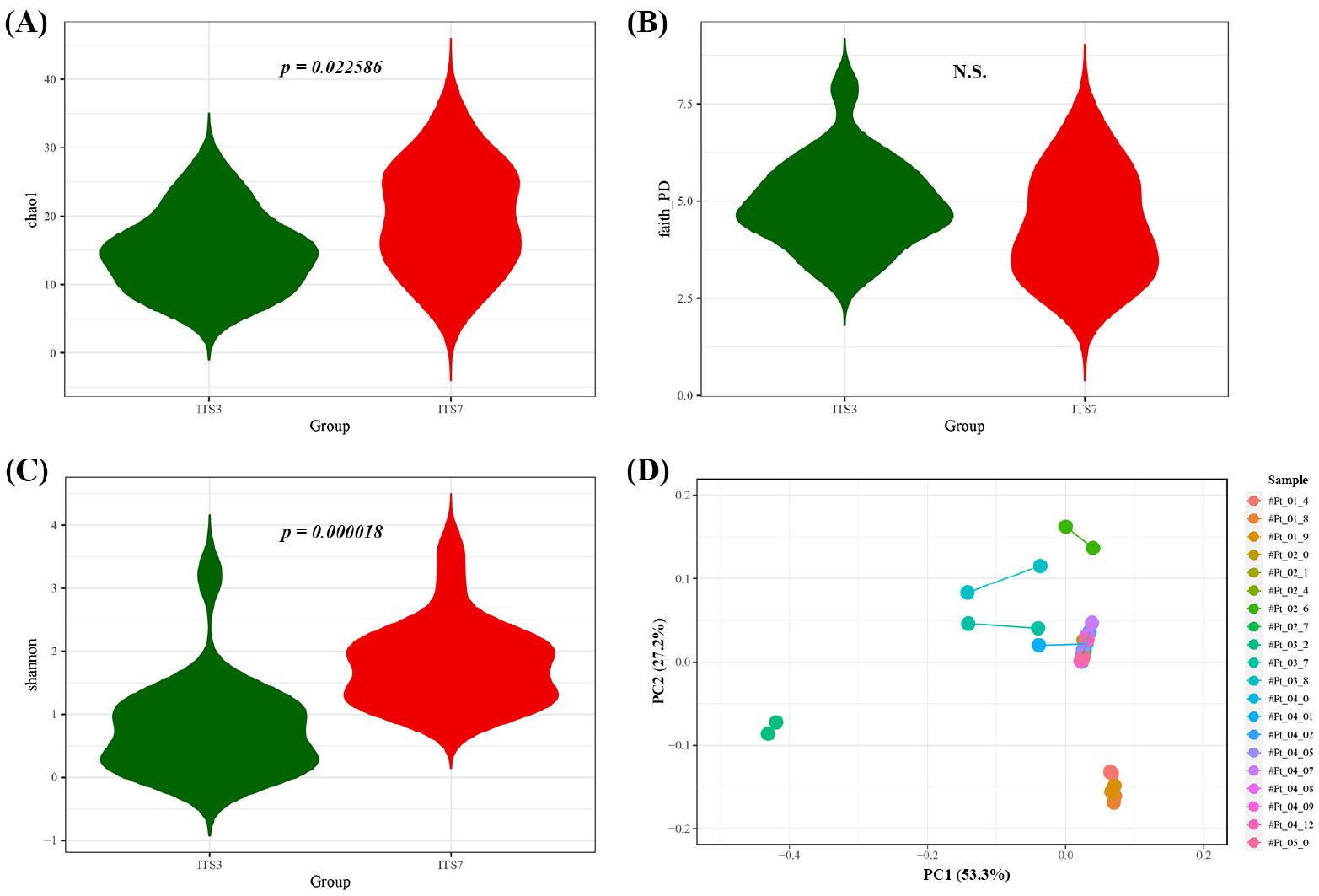 Next, phylogenetic tree was constructed to compare the species assigned by ITS3 primer and ITS7 primer. Candia formed the major tree which included C. albicans, C. tropicalis, and C. parapsilosis. Second tree included Wickerhamomyces anomalus, Meyerozyma carbbica, Debaryomyces hansenii, C. glabrata and C. sake. Another tree included Clavispora lusitaniae (C. lusitaniae), C. intermedia and Yarrowia porcina (Y. porcina). There were three more trees that were unidentified at the species level. Interestingly, there were several species that was only assigned by ITS3 primer which include C. sake, C. intermedia, C. parapsiolisis and Y. porcina (Fig. 3).

Phylogenetic relationships among mycobiome sequenced with ITS3 and ITS7 primers. Primers are shown in shape and patient samples are shown in color. The size of the shapes indicates the relative abundance of the taxon in the sample.

Finally, relative abundance of each sample was plotted to observe the fungal abundance (Fig. 4). The most abundant species was C. albicans and the relative abundance showed similar proportion in most samples. However, the abundance of C. lusitaniae was assigned more abundant (9.98% vs 6.29%) using ITS3 primer in several samples (p=0.047). Also, C. sake (5/20), C. intermedia (8/20), C. parapsiolisis (15/20) and Y. porcina (2/20) was only assigned by ITS3 primer. Although both primers assigned Alternaria at the genus level, A. betae-kenyesis was only assigned by ITS7 primer (10/20). Although not significant, the abundance of Malassezia species including M. arunalokei and M. restricta was assigned more abundant using ITS7 primer (p=0.057).

Comparison of the relative abundance of the species produced by ITS3 primer and ITS7 primer in each sample.

While the biomass of the oral mycobiome is low in healthy subjects (2), mycobiome including Candida rapidly increases in intubated patients with reduced oral immunity and poor oral hygiene (5). To determine the mycobiome community, ITS region, which is located between the 18S and 26S rRNA genes, is one of the most frequently targeted for clinically important fungi (14). In this study, we tested two primer sets (ITS3/ITS4 and ITS7/ITS4) targeting ITS2 to evaluate their performance on oral mycobiome analysis.

In this study, we compared the performance between two primers in predicting oral mycobiome in intubated patients. Other primers should also be performed for optimum prediction. Selecting optimum primers should provide better understanding of the mycobiome community in oral cavity.

This work was supported by a 2-year research grant of Pusan National University.

Harmonization ICf. The international council fo harmonization of technical requirements for phamaceuticals for human use (ver.3) 2017. Available from: http://www.ich.org/fileadmin/Public_Web_Site/ABOUT_ICH/Available from: Articles_Procedures/ICH_EWG_IWG_SOP_v3.0_final_22Jun2017-.pdf.